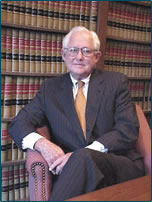 He was graduated from Washington and Lee University, where he was a member of Phi Delta Theta Fraternity, Phi Delta Phi Legal Fraternity and Omicron Delta Kappa, receiving a Bachelor of Science degree in 1947 and a Juris Doctorate degree from its law school in 1951. He served as a Naval Aviator during World War II, flying night submarine patrol in the Atlantic and Mediterranean and after the war, flying as a Navy "Hurricane Hunter" in the Caribbean.

An initial co-founder of The Episcopal School of Jacksonville, in which he took great pride, he served on its Board of Trustees and as its Chairman for many years after which the administration building was named for him. He now serves as Trustee Emeritus.

A member of St. Mark's Episcopal Church, he served on its Vestry for many years and frequently participated as a volunteer at the Sulzbacher Center. He also was President of the Jacksonville Symphony Association and served on its Board both actively and as an honorary member for over 40 years. He was an honorary life member of the Florida Yacht Club, The Friars, long term member of the Wednesday Group and the Jacksonville Rotary Club of which he was a Paul Harris Fellow. Active as a long-time member of Memorial Park Association and past president, he was devoted to the beauty and maintenance of the park where he had learned to ride his first bicycle at age five.